8 year old female with no respirations after 5 positive pressure ventilations. - ANSWER Which patient would be classified as "immediate" during and MCI? Calmly reassure her, encouraging her to calm... ly slow her rate of breathing. - ANSWER A 13 year old female watching a horror movie states she can't catch her breath and her fingers are numb. Respirations are 30 and deep with Sp02 of %100. She is speaking in clear sentences, has clear and equal breath sounds. You should? 10 to 12 - ANSWER You have inserted an OPA for a 21 year old apneic male. How many times per minute should you ventilate him with a BVM? Oxygenating and ventilating before and after suctioning. - ANSWER Proper technique to suction patient's airway includes? 15 liters/min - ANSWER When ventilating patient with BVM, what is the appropriate oxygen flow rate? Apply a nonrebreather mask at 10 liters/min - ANSWER An obese man complains of sever difficulty breathing. His skin is cool and moist and breathing 22 times per minute. He indicates he never goes to the doctor and often feels dizzy after walking. You should? Pneumonia - ANSWER A 42 year old asthmatic patient complains of chest pain, shortness of breath and a violent cough that produces brownish sputum. What is the most likely cause? Pneumonia - ANSWER An 89 year old patient complains of difficulty breathing and a productive cough that has gotten worse over the past 12 hours. You should suspect? Decreases in size, causing exhalation - ANSWER As the diaphragm and intercostal muscles relax, the chest cavity? Evaluate both the respiratory rate and the rise and fall of the chest - ANSWER During initial assessment of an adult's respiratory status, you should? Pediatrics - ANSWER In which group of patients are you likely to encounter "see-saw" breathing? Mouth, Pharynx, trachea, bronchi, alveoli. - ANSWER Which sequence correctly traces the path oxygen takes from the atmosphere to the lungs? 10 lpm via nonrebreather mask - ANSWER A 16 year old asthmatic female in a tripod position complains of increased shortness of breath. SpO2 is 79%. You should administer oxygen at? Encourage him to cough - ANSWER A 34 year old man is saying he is choking, You note stridor and hoarseness in his voice. What should you do? Assess insertion depth of the catheter - ANSWER An unresponsive trauma patient is gurgling. When you suction the oropharynx with a rigid catheter, the patient gags. You should? Chronic Bronchitis - ANSWER Thin 54 year old male with a nonproductive cough complains of difficulty breathing. Sitting upright with hands on his knees and you see retractions. Notice oxygen tubing around the house. You should suspect medical history of? Remove dentures - ANSWER Semiconscious patient's dentures completely loosened. You should? Diffusion - ANSWER Carbon dioxide and oxygen exchange at the alveolar level by which process? High flow oxygen with a nonrebreather mask - ANSWER 20 year old female unable to cath breath after minor car crash, numbness and tingling to hands and face. Vitals are P 118, R 24. What should you do? Dyspnea - ANSWER Which term best describes respiratory difficulty? 350 mL The average adult ventilation is 500 mL, but there is an area of dead space that traps 150 mL of air. 350 mL effectively reaches the alveoli for oxygen and carbon dioxide exchange. - ANSWER What is the amount of air that normally reaches the alveoli in an adult? Empysema Emphysema is a chronic destructive process of the alveoli. The alveoli regenerate but they are misshaped and consist of scar tissue. The scar tissue inhibits gas exchange. She has pursed lips because she is attempting to keep the alveoli open. Without the extra effort her alveoli will collapse due to increased surface tension. - ANSWER A 77 year old female has dyspnea, speaks in short word burst, and breathes with pursed lips. Lung sounds are diminished, distant, and clear. Vital signs are BP 152/90, P 86 and irregular, R 23. What should you suspect? Spontaneous pneumothorax Performing strenuous activites can, on occasion, cause a collapsed (spontaneous pnemothorax) He has stable vital signs so you should suspect a S.P. If he had been hypotensive (88/40), you should suspect that the S.P had developed into a tension pneumothorax. - ANSWER An 18 year old male is cyanotic and complains of sharp chest pain and difficulty breathing after lifting weights. Vital signs are BP 110/66, P 88, R 22. What is the most likely cause? Bag-valve mask He is unresponsive and breathing too slow. This is a "Sick" patient and assisting his ventilations should be the first intervention. You can increase his respiratory rate with a bag valve mask, which is why it is the most correct choice. - ANSWER An unresponsive 43 year old male is cool, pale, diaphoretic, and breathing 6 times a minute. Which device should you use to administer oxygen? Assist his ventilations He is in respiratory failure. His breathing is ineffective because his respirations are fast and shallow. Shallow respirations do not allow for adequate oxygen exchange because the air is not drawn down far enough into the lungs. Assisting his breathing with positive pressure ventilations will help reduce any pulmonary edemy from the lower airway burns. - ANSWER A 42 year old male complains of shortness of breath after being sprayed with super-heated steam. He has burns to his face, neck and upper chest. Vital signs are BP 112/66, P 124, R 28 shallow and labored. What should you do? Bronchi The trachea splits at the carina into the left and right bronchus. The bronchi get smaller and smaller until it reaches the terminal bronchioles where the alveoli are located. - ANSWER What are the structures that brach off the trachea into the lower airway? Wheezing Wheezing is a high pitched whistling sound heard on EXHALATION. Wheezing suggest there is a LOWER airway OBSTRUCTION or CONSTRICTION. Exhalation is a passive process, and the wheezing noise is air passively leaving constricted bronchioles. - ANSWER What is the term for high-pitched whistling sounds heard during expiration? Labored The use of accessory muscles is a sign of respiratory distress or failure. Nasal flaring is the body's response in effort to increase the size of the airway and attempt to draw in more air with each breath. [Show More] 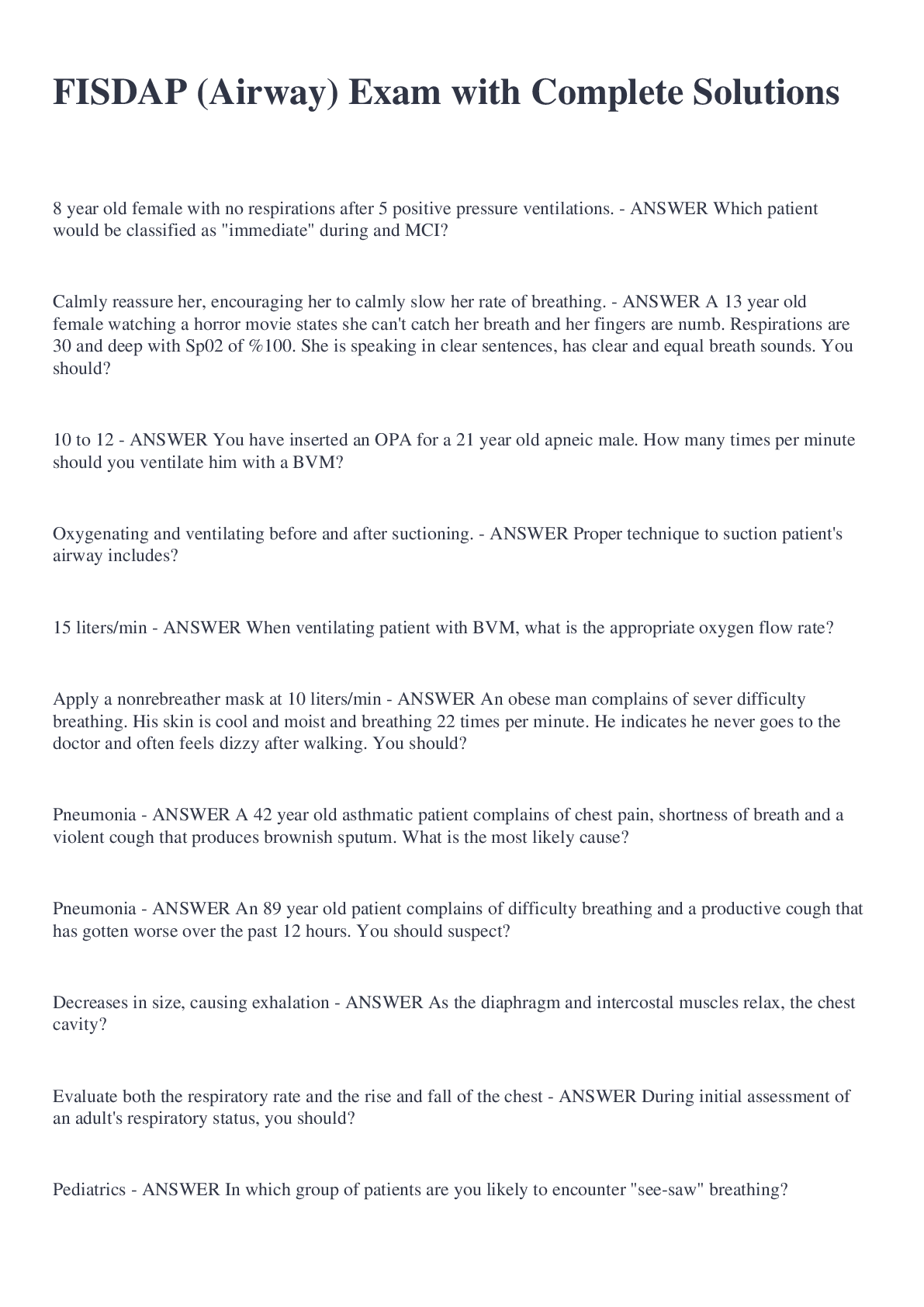 ATLS Test 1 Exam A 22-year-old man is hypotensive and tachycardic after a shotgun wound to the left shoulder. His blood pressure is initially 80/40 mm Hg. After initial fluid resuscitation his blood p...

Certified Nursing Assistant / (CNA) Exam 100 Questions and Answers. 1. What is one important reason why the bed should remain wrinkle-free? 2. What is the term for a device that replaces a missing...