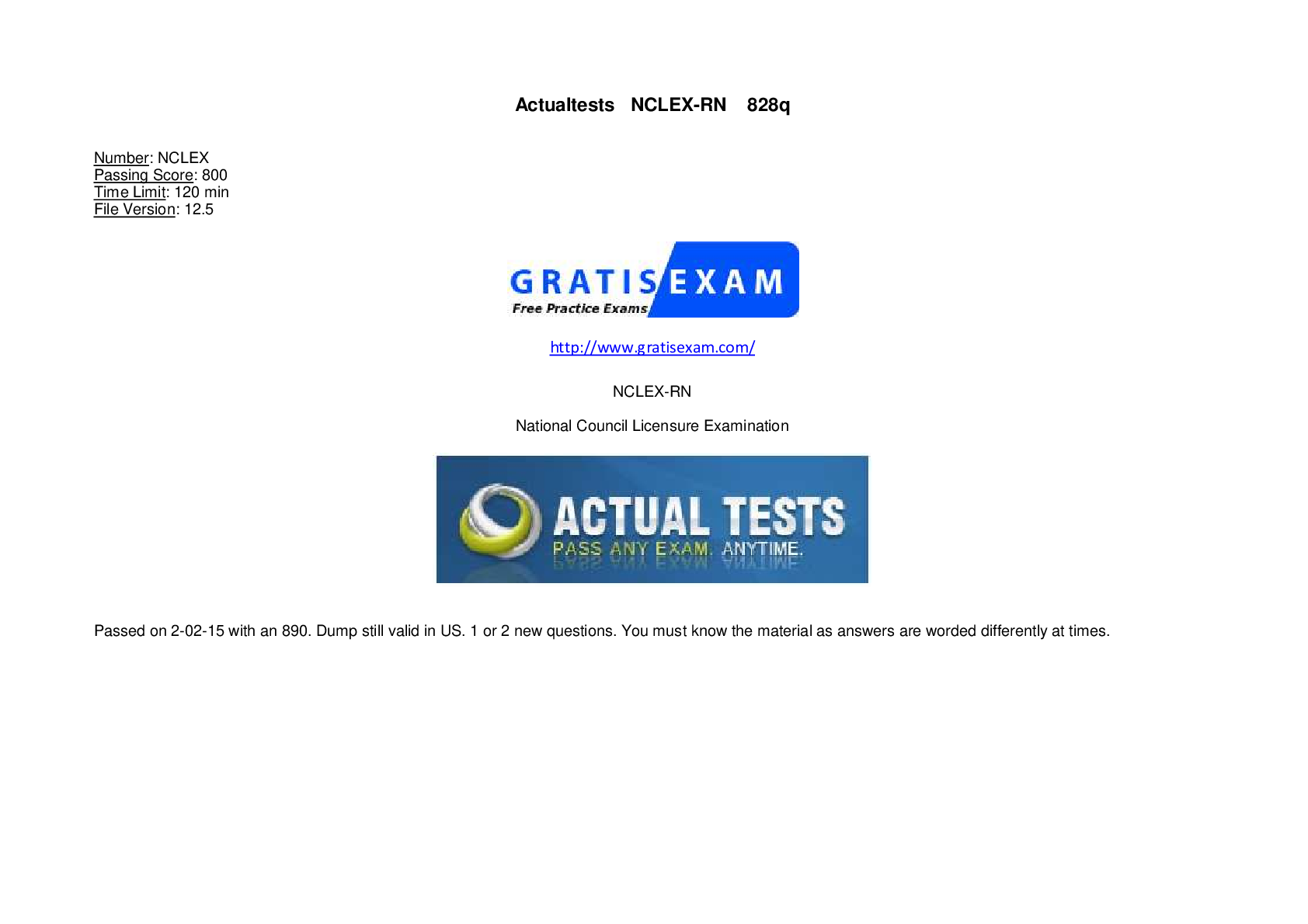 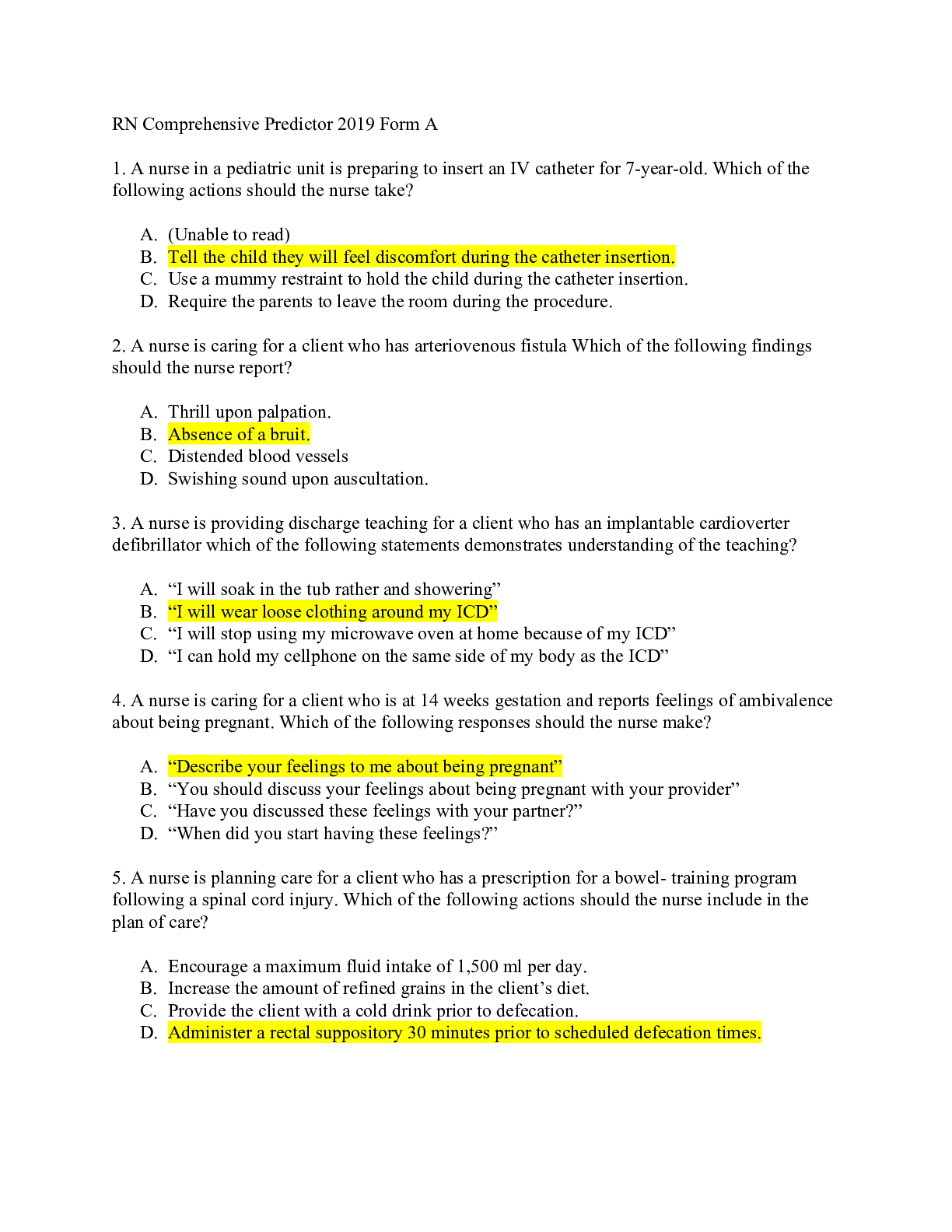 RN Comprehensive Predictor 2019 Form A 1. A nurse in a pediatric unit is preparing to insert an IV catheter for 7-year-old. Which of the following actions should the nurse take? A. (Unable to re... 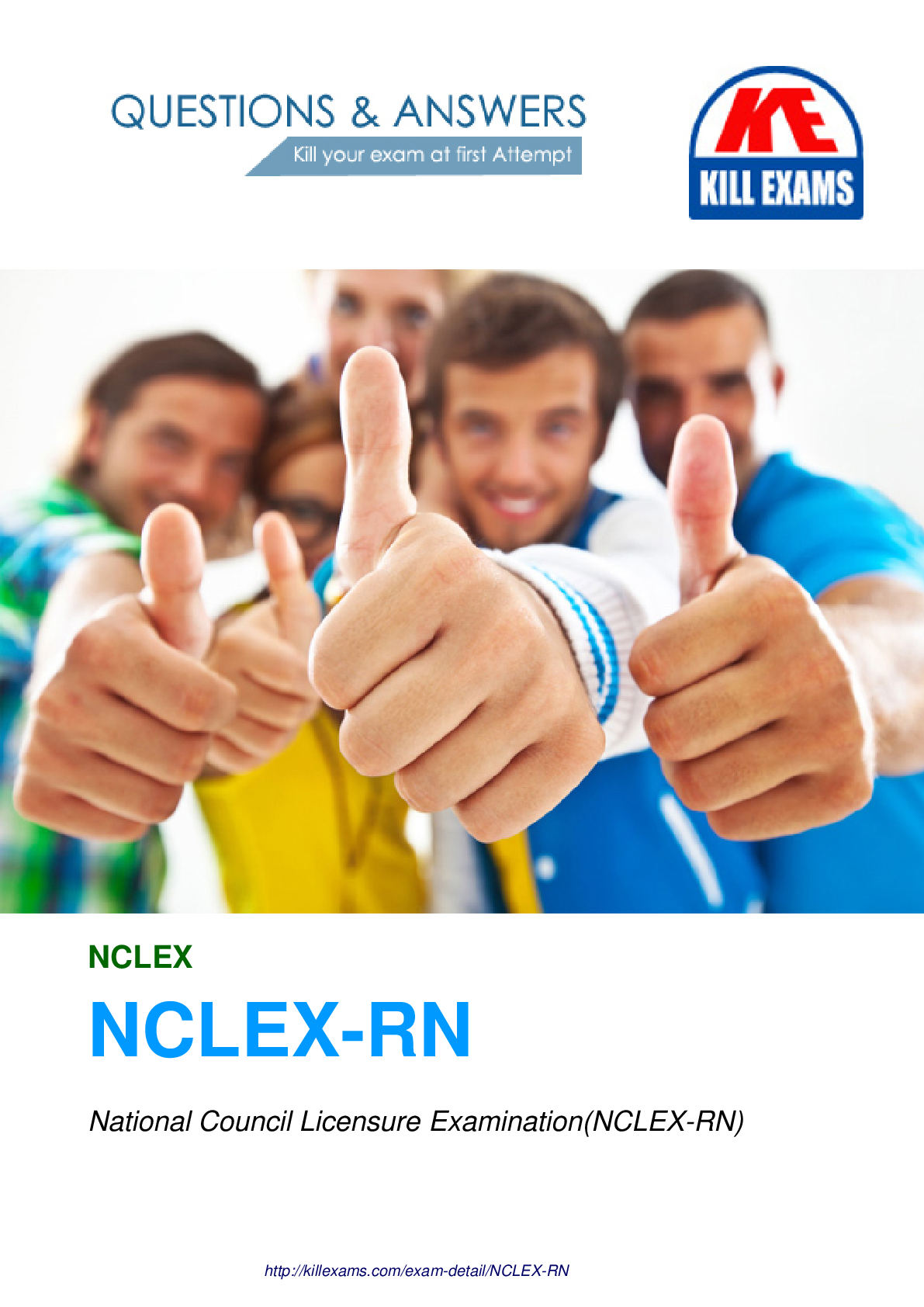 By tutor2 3 days ago 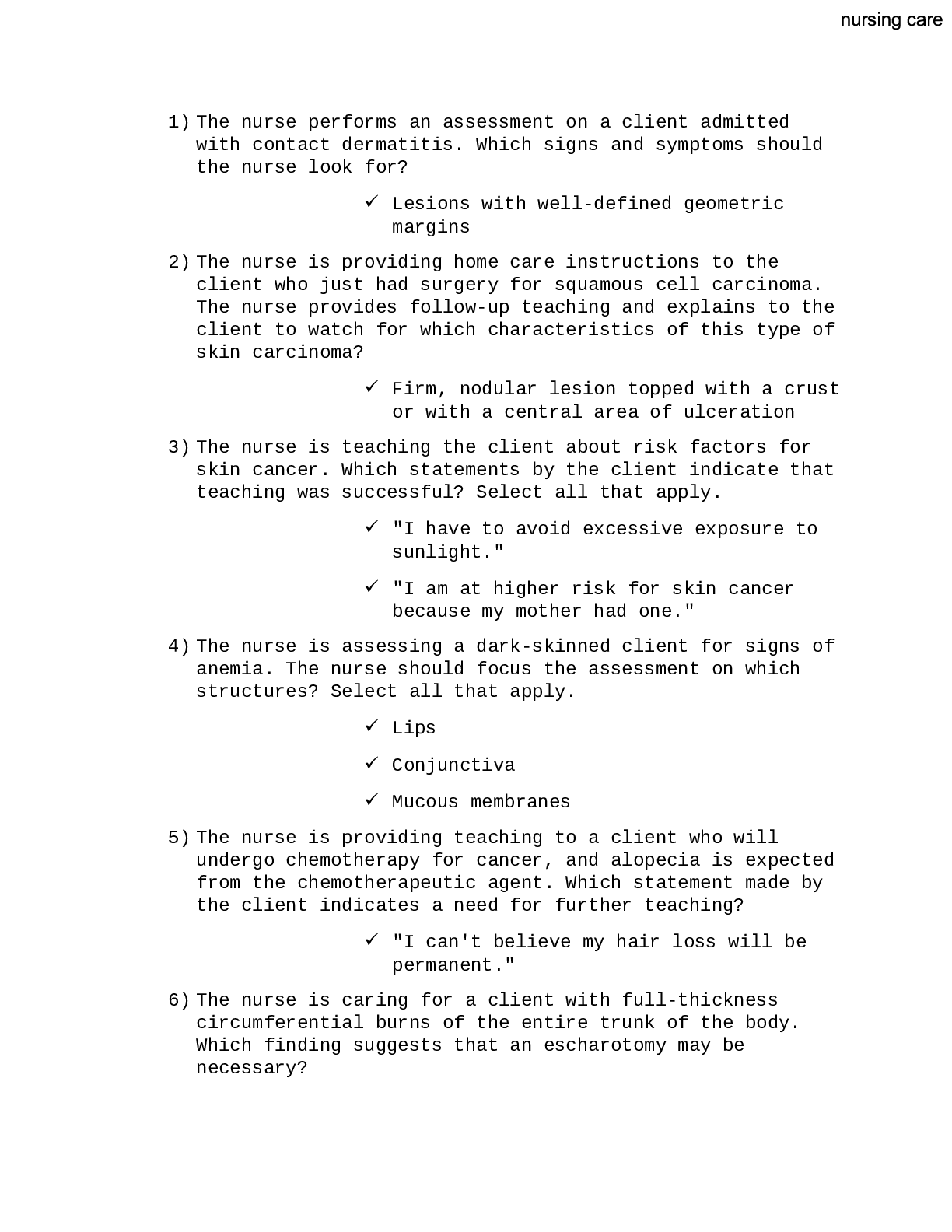 SAUNDERS COMPREHENSIVE REVIEW FOR NCLEX THREE (Recovered) 1) The nurse performs an assessment on a client admitted with contact dermatitis. Which signs and symptoms should the nurse look for? 2) The... 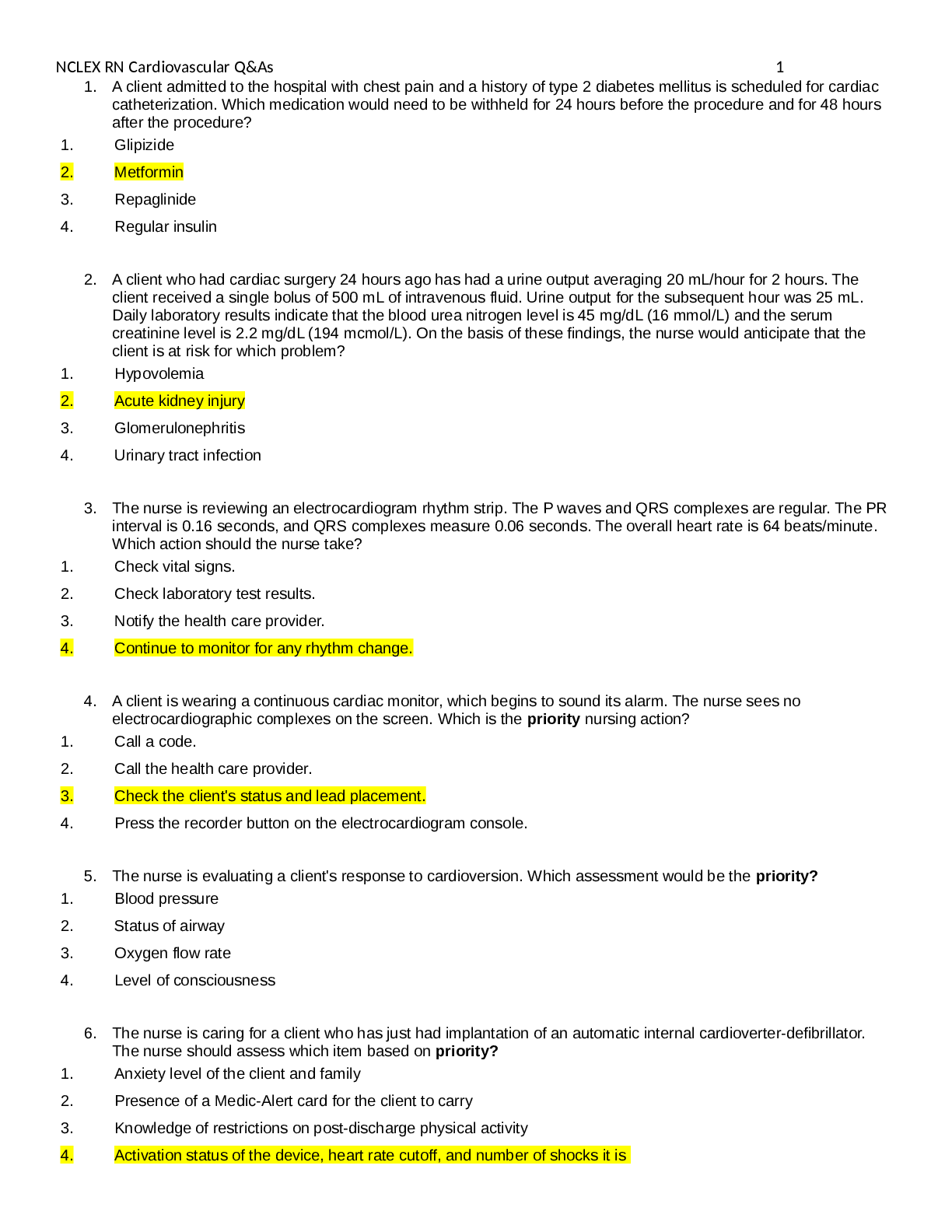 NCLEX RN Cardiovascular 150 Q&As 1. A client admitted to the hospital with chest pain and a history of type 2 diabetes mellitus is scheduled for cardiac catheterization. Which medication would ne... 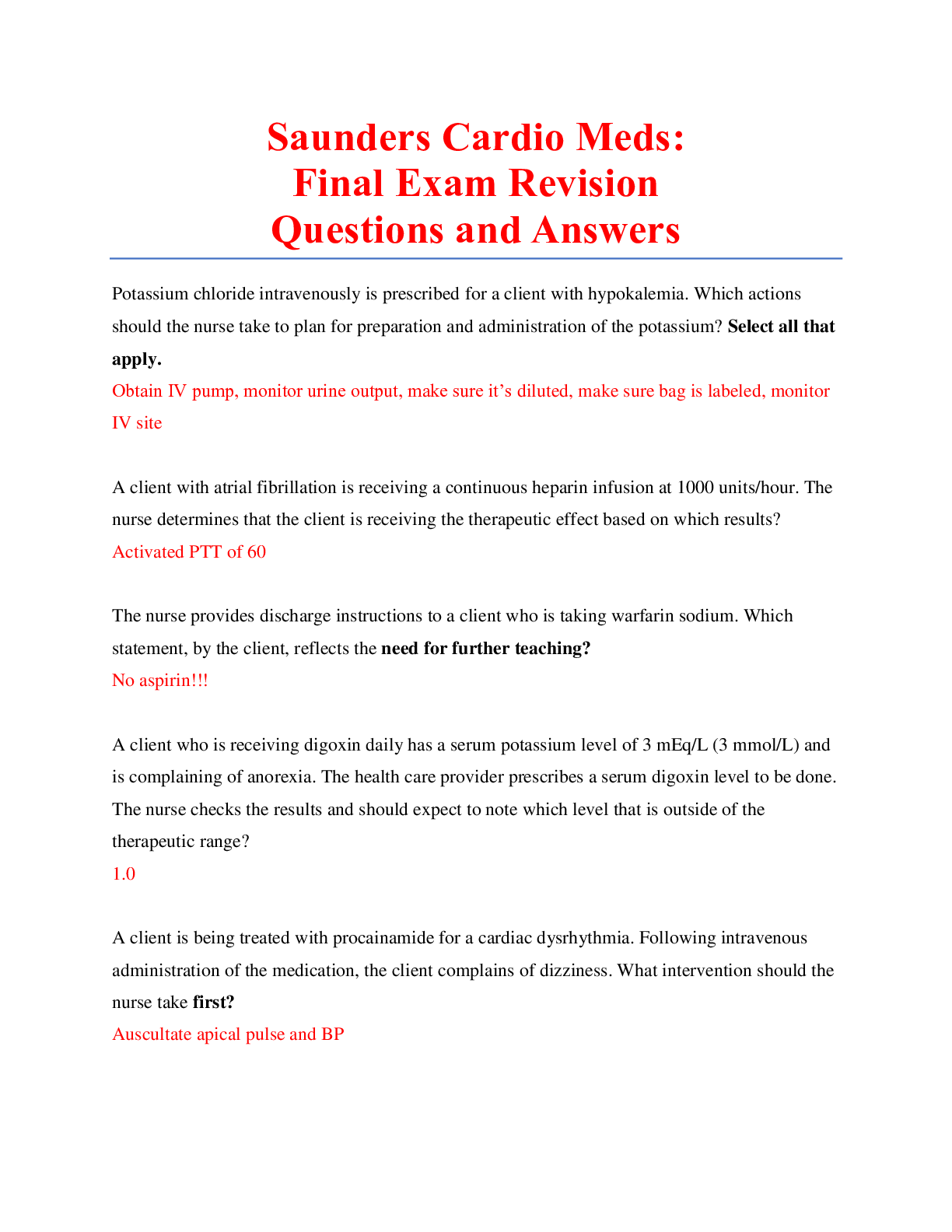 Saunders Cardio Meds: Final Exam Revision Questions and Answers Potassium chloride intravenously is prescribed for a client with hypokalemia. Which actions should the nurse take to plan for prepar... 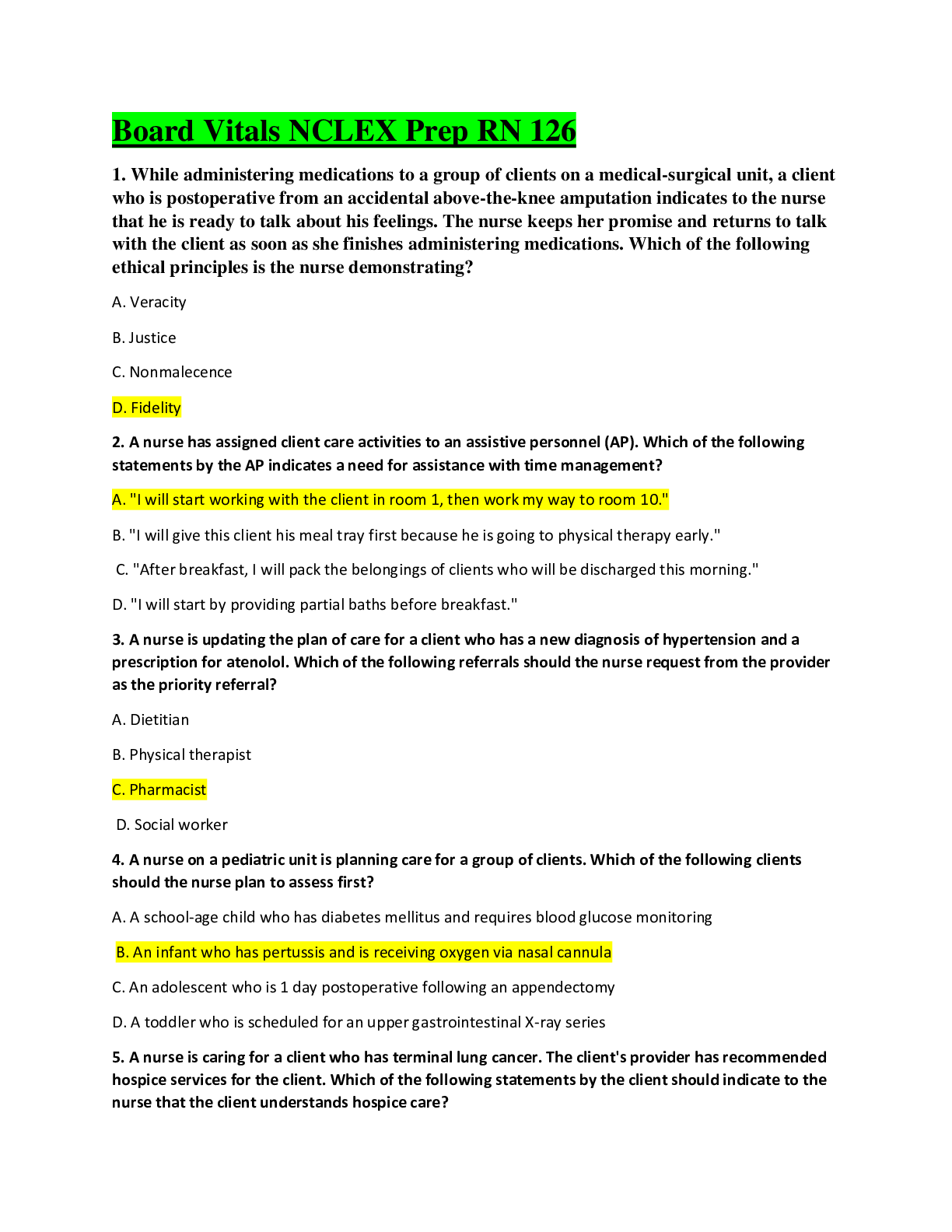 Board Vitals NCLEX Prep RN 126_Questions and Correct answers (all 100%)

Board Vitals NCLEX Prep RN 126 1. While administering medications to a group of clients on a medical-surgical unit, a client who is postoperative from an accidental above-the-knee amputation indicat... 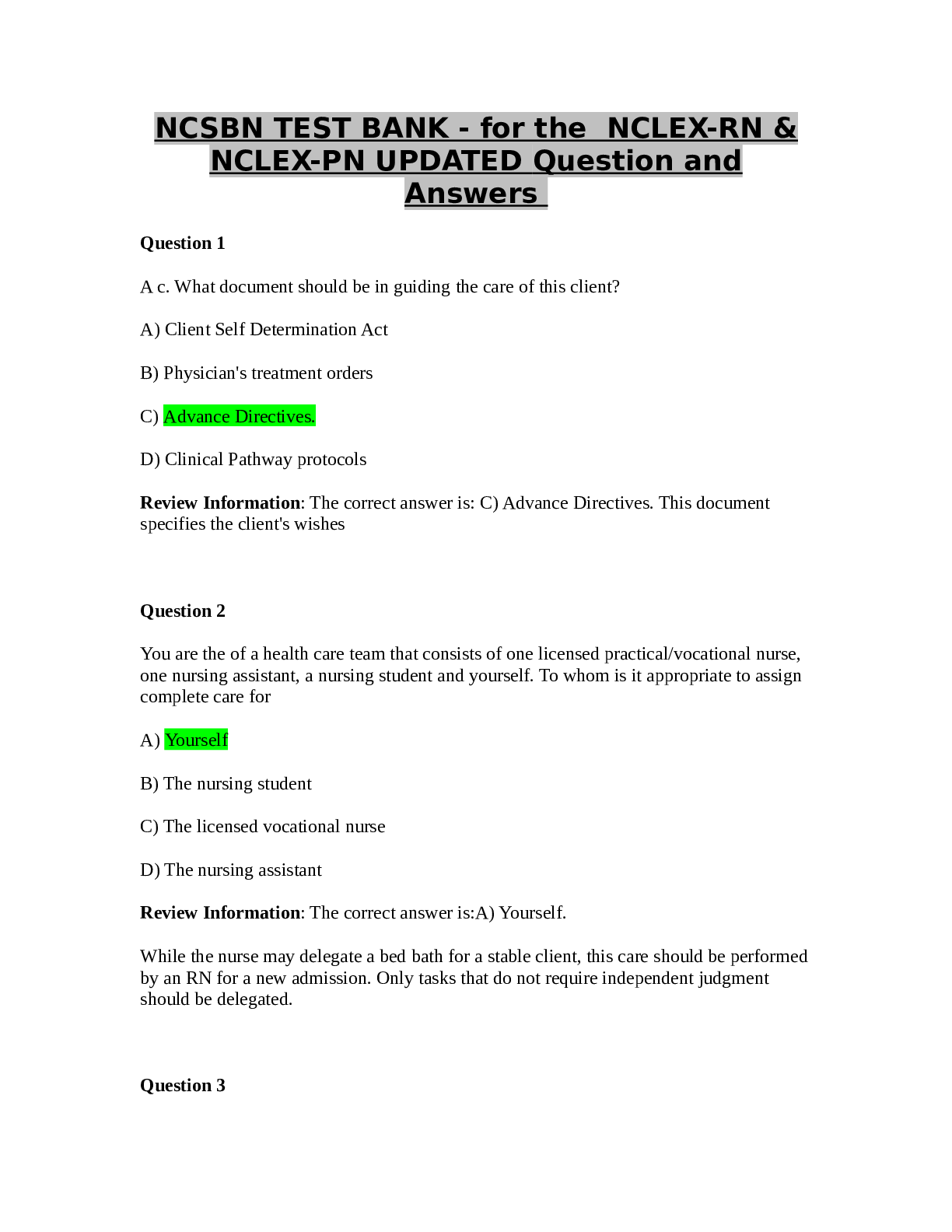 By Homework provider 1 year ago

Nursing> NCLEX-RN > SAUNDERS COMPREHENSIVE REVIEW FOR NCLEX ONE. This Document Contains 1004 most tested questions and answers. 100%. (All) 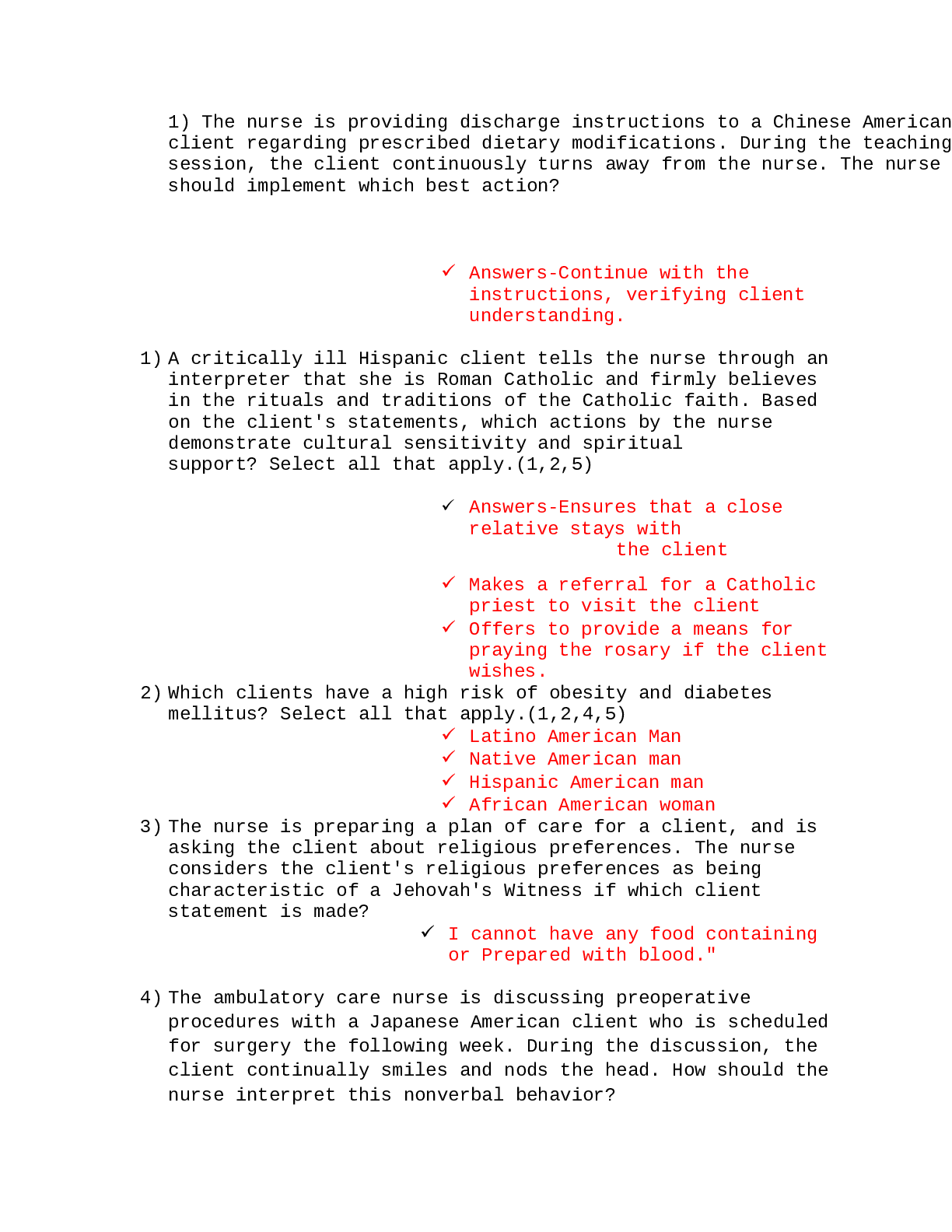 SAUNDERS COMPREHENSIVE REVIEW FOR NCLEX ONE. This Document Contains 1004 most tested questions and answers. 100%.

SAUNDERS COMPREHENSIVE REVIEW FOR NCLEX ONE 1) The nurse is providing discharge instructions to a Chinese American client regarding prescribed dietary modifications. During the teaching session, the... 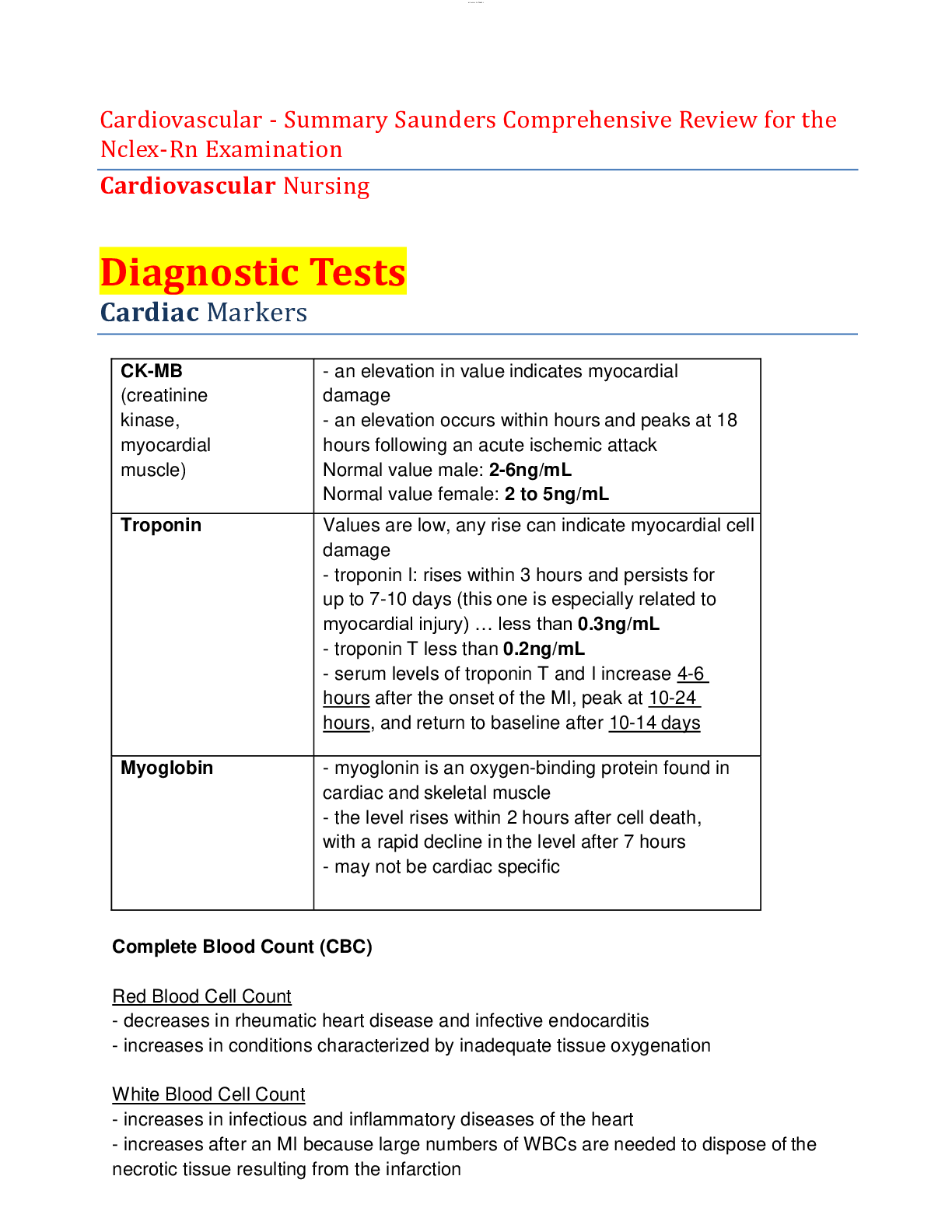 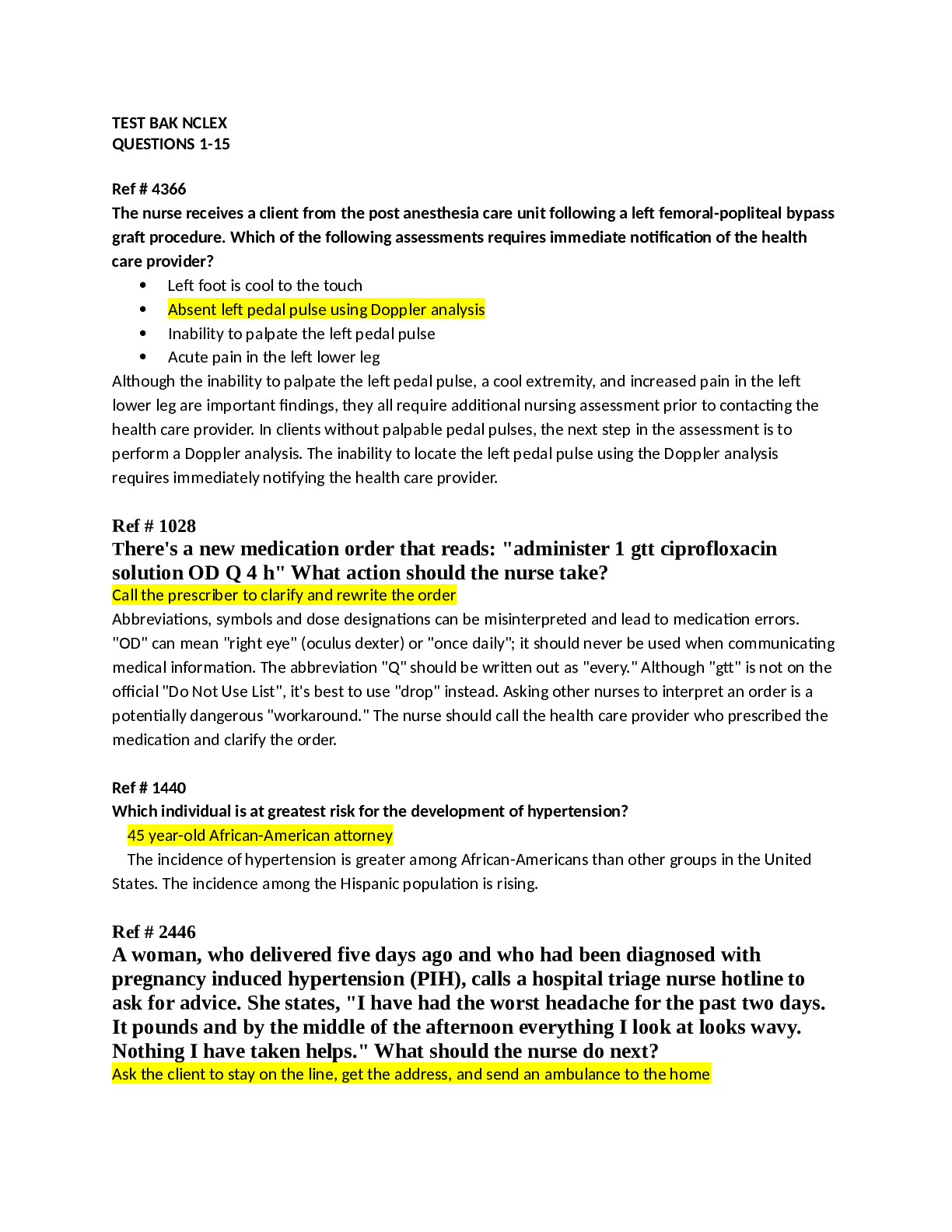 By Expert 1 year ago